Yup, it's that time of year again. The nights are just starting to draw in, apples are ripening, conkers are taunting us with their utterly pointless abundance (I want to gather thousands of them, but what would I do with them?), spiders are invading our homes, and a gamer's thoughts turn naturally to that archetypal fantasy baddy, the orc.


Whether you prefer your orcs to be the hulking green gorillas of recent GW fare, the stooped and debased elves of Tolkien, mid-level dungeon menace of D&D, or something else entirely, it's hard to deny the place of the humble, quarrelsome orc in the vast array of threats to the nations of men, dwarves and elves.

From a gaming point of view, orcs were my first "army" thanks to the 4th Edition boxed set replete with sprue after sprue of goblins and high elves; I may even have finished painting a couple of them! In combat, I have to admit, the serried of rock-hard black orcs that nearly actually won a battle one time were almost entirely made up from 25mm square pieces of cereal packet to mark out their base size. Not exactly Erny's civilisation-threatening horde.

I mention Erny in particular as a point of comparison as Orctober was his idea in the first place. He is encouraging gamers to paint some orcish figures or do something creative with an orcy flavour (I'm not sure that orcs would taste nice...) during this month both for the hell of it, and possibly for a prize as well.

Anyway, why am I posting about orcs? Well, I seem to have bought an orc army without noticing. A couple of years back I picked up a handful of Kev Adams' (naturally) new sculpts from Rhoninstorm miniatures. Rhoninstorm are sadly, as far as I know, totally defunct but the sculpts were picked up by another KA fan and they are not only still available from him (trading as Crooked Claw Miniatures) but the range is steadily expanding with a recent successful Indiegogo campaign. Long story short, I acquired more CC goblins at various sales. And in the Indiegogo. And I got a joblot of preslotta bits and bobs which turned out to be mostly of the orcish variety. And then there was a bargain on ebay. And then phreedh was selling a wyvern I've always wanted. And...

I think we all know how that goes, don't we? 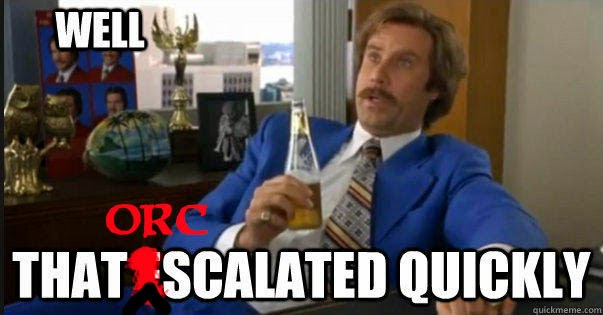 So, it turns out I have almost an entire fieldable orc and goblin army:


While that might seem fairly paltry compared to, say, Thantsant's vast horde (below), it will give me plenty to be getting on with. I think I might start with the snotlings/lesser goblins for a change of scale from the giant I'm slowly working through.