Much to my wife's bemusement, I have settled down in front of whatever medieval documentary she has chosen over the last week or so (apart from the evening where mini-Rab #2 had to go and get his leg x-rayed after over-exuberant bubble-chasing - don't ask!) complete with painting tray. To be fair, it is quite a while since I did any and am rather in the grip of a painting frenzy. Well, frenzied by my standards: I've painted seven figures in the last ten days! This takes my annual total to.... nine.

I was going to split them between two or three posts, just to make me feel like I'm achieving some blogging as well, but that seemed a bit naff, especially as they're all for my chivalric gaming: SBH, Goblinquest and what I hope will be a workable set of house rules to play Dux Brit but with knights in shining armour and goblins.

So, to the "hastily snapped on my phone up against an impromptu background of polystyrene" pictures! First up, a couple more of the old Citadel, now Foundry Feudal knights I picked up from Meyer over on the LAF. 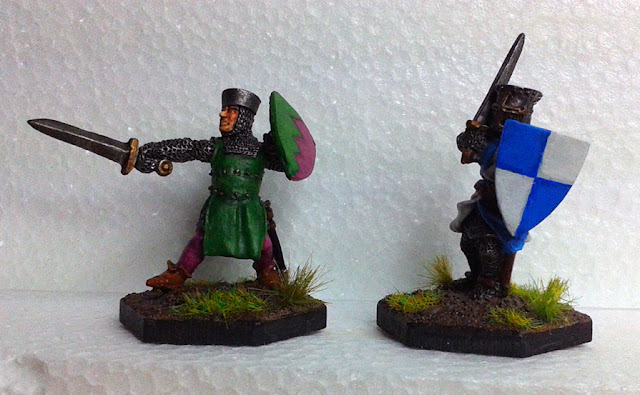 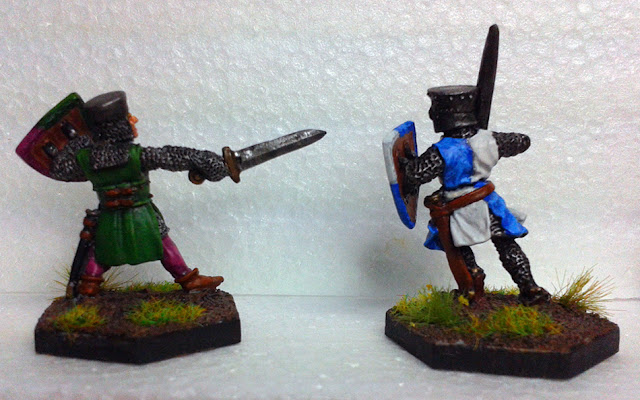 I was pleased with the face of the green chap and the blue and white quartering looks pretty good in the lead.

Here is a group shot of all my knights completed so far, most of which have appeared on here at some point already:

I also painted up the first four of my Curtey's Miniatures spearmen as retainers for the central knight above, the one with the yellow and blue quartering and red cadence mark:

There are four more of these to come, with mail shirts so they should paint up even quicker. I have to admit I'd already started this quartet, blocking out their gambesons and getting the bloody fiddly spears to stay on. Have a gratuitous close-up at my first attempt to do eyes using a micro pen, just to make you feel better about your own brushwork:

And then, all ready to be oppressed and witness at first hand the violence inherent in the system, my peasant. I'm actually ludicrously proud of the way he turned out, especially his face, even though it has acquired a rather peculiar orange tinge in the photo. Very odd, considering that the other colours are almost spot on with how they look in Real Life (tm)...

So, there you go. More recruits for my medieval-themed madness. Oh, and I also received a luvverly, heavy box of resin buildings from PMC Games, full of thatched huts, a blacksmith, a church and other stuff. They're still in their bubblewrap but will form the basis of my next post. Also in the near future, I've got involved in playtesting "Blood on the Sands", a Roman gladiator game by Furt over on the LAF which, on a first readthrough, looks excellent.