I decided Deadcember had space for some verbiage as well as painting.

As is my wont, I succumb to sales and bargains far too easily, which led to me not only snapping up that unit of skeletons I've been painting step-by-step for your delight and delectation, but also a couple more bits from Ral Partha Europe. Specifically for this post, a pair of undead ogres with two-handed weapons, originally from the DSA/Armalion range!

This is what they look like in their catalogue: 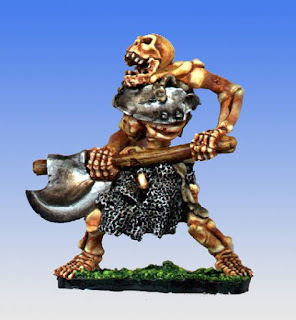 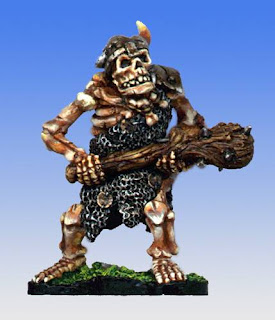 Cool, huh? And they were on sale. And our local Oldhammer group have taken the name OGRE. How could I resist?

The question that followed the purchase was, of course, "How will I field these monstrosities?" Perhaps surprisingly for a game that would later publish two whacking great hardbacks on how to design your own monsters and demons as protagonists in your games, a basic "undead" rule is sadly lacking, at least in terms of how to adjust stats or allocate a points value. So I had a play with the points value calculator in the 2nd Ed. Bestiary book (there's an online version with useful discussion over at Zhu's excellent blog if you don't have 2nd Ed. to hand) and discovered the following.

A standard human has a basic cost of 5pts. A standard skeleton, according to the value of its statistics, should have a basic cost of 2pts (1.75 rounded up) but actually costs 10. So where does this extra (ghost?) amount come from? Like all undead (apart from ghouls, but they're not strictly speaking dead-undead), skeletons are immune to psychology as well as causing fear in their opponents - that's got to be worth a few points! On the downside they are subject to instability (they could just crumble away) and stupidity if there's no champion or magic-user within range to imbue them with purpose. That's not so good and should bring down the cost again.

This is all a bit hand-wavey, unfortunately, and leaves the questions - Does undeadness cost a basic 8pts? Is it a base-cost muliplier, like Zhu's "ugezod" factor? Should I reduce the living ogre's stats by the same amount that a human's are to get a skeleton? Is there a minimum? What is the average velocity of a European swallow?


Where was I? Oh yes. Undead ogres. As wandering monsters, or scenario creatures, I'd obviously leave it to the GM. For balancing forces to a set limit (which may or may not be the same for all players - scenario gaming is the best), however, I want something reasonable. Here goes.

All calculated creature stats in WFB are based upon the humble human. The first chart shows those stats and the modifier is the cost for deviating from that norm. So, if I wanted to create a creature that was basically a human but with a WS of 5 and T of 4, it would cost 7 points. A base cost of 5, plus (2 x 0.5) for the WS increase, plus (1 x 1) for the T increase. Clear? Creatures whose Profile Points Value (ppv) exceeds 10 have a further multiplier (1.5 for 11-15, 2 for 16-20, 3 for 21-30, etc.) to account for their individual destructive power.

The second chart shows this calculation for a normal ogre.

Right. Next step. How does a skeleton human vary from a living human? First table shows the adjustments, second shows how the same steps would apply to an ogre:

This felt like too much of a step down - I still want these to be scary brutes, so I tweaked the stats back up a bit before calculating the cost:

That feels about right. I added in the extra 8 points that being undead seems to give to human skeletons for my final values:

Comments and criticism welcome,
Rab
Posted by Rab at 11:48