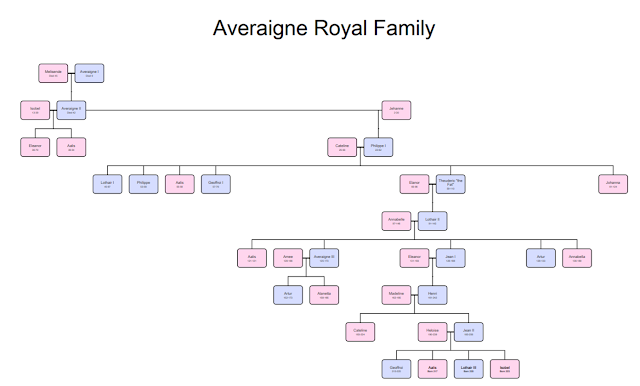 Amazing what can be achieved while a bunch of fifteen year olds are doing a test!
Posted by Rab at 13:17 143 comments:

Meet Emrim. For a dwarf (and a thief*) he's a good sort, and a fine shot to have alongside you in a fight. Not behind you, mind, he's not a perfect shot by any means. 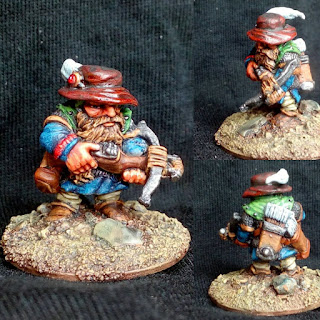 This lovely old figure (not sure where he's in production now; Viking Forge? Alternative Armies?) will be my ten year old's character in our Western Lands campaign using the early D&D retroclone ruleset, Basic Fantasy RPG, which is my go-to set for this kind of thing. So far we've gamed solely with paper, pencil, eraser, and imagination, but I think it might respark their interest to have some representational figures and a gridded mat for key encounters.

I'm not planning on handing the figure over yet. Apart from anything else he needs varnishing and a couple of foliage bits on the base. The main reason is that I have a vague plan to make one if those "deluxe" gaming boxes that look like a book but contain a dice box with pencil, dice, and figure storage. We'll see.

Thirty-one figures painted this year now, if you include 10mm figures; seventeen of them since late August!

Blogging has been the thing that has continued to feel like a drag since more-or-less recovering my mojo after a slump in pretty much everything last Spring. It has felt like a chore; like something I ought to be doing and it has hung over me somewhat.

Utterly daft, considering this hobby is my escapism from real-world responsibilities!

In the meantime, if you're interested in keeping an eye on what I'm up to (including my newly added interest of gaming the English Civil War in 10mm), I can be found on Instagram as @rabsgeekly.

Maybe I'll see you there? 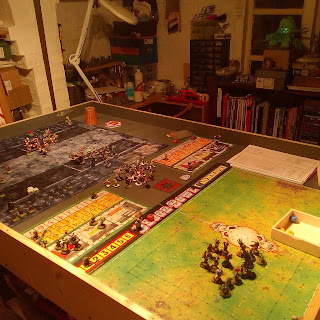 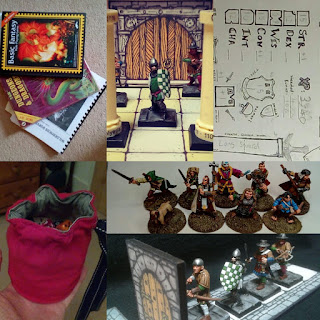 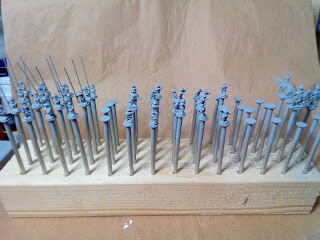 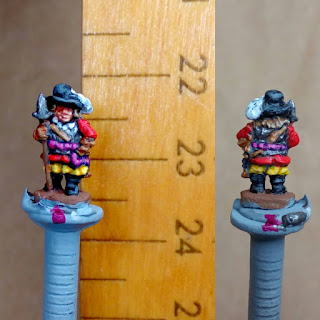 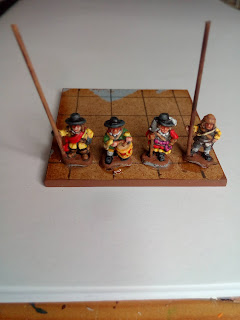 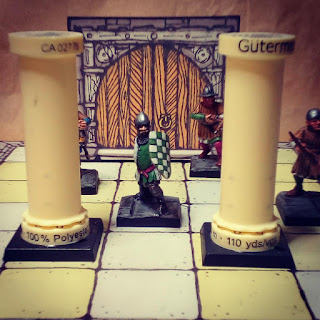 While I do get enthusiastic about things pretty easily (I like to think of it as a childlike sense of wonder), it's not often that I'm reduced to gibbering excitement. This is one of those times. 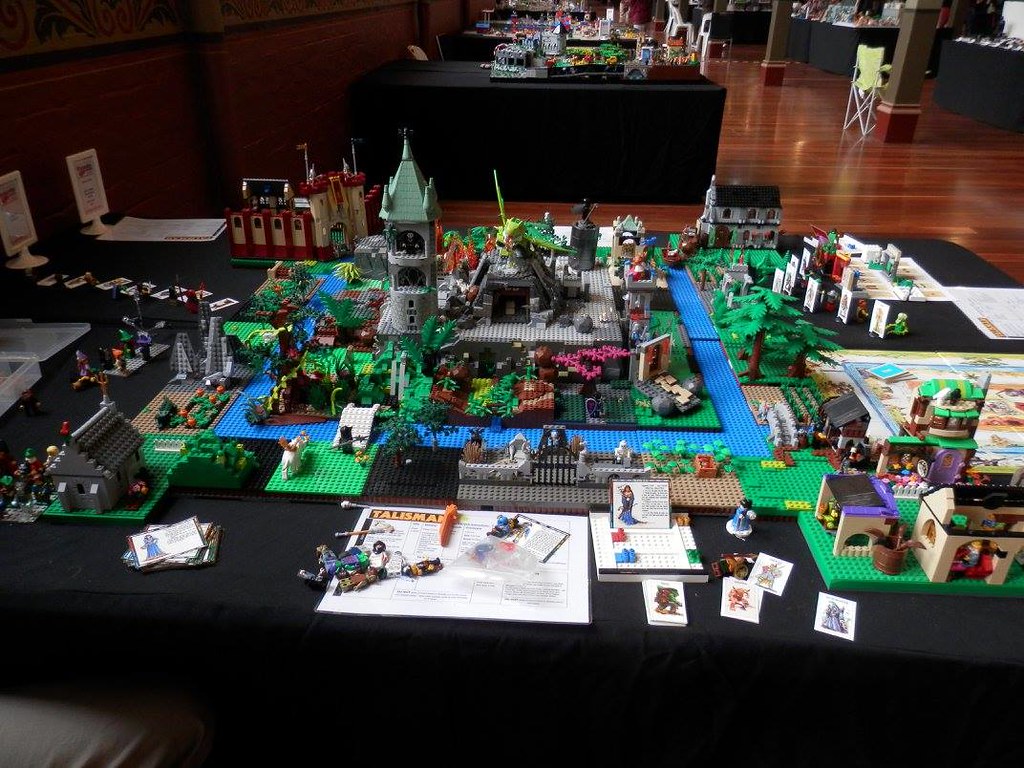 Yes, that's a full Talisman 2nd Edition board made out of Lego!!!!

Michael Christiansen is the genius behind it and you can see all 104 photos he's posted at this album over on flickr.

[The story so far]

Time passes 01
We've now reached the stage where all the players have dispersed to university etc. so our gaming is likely to be far more spread out, with maybe only a single game session per year. This is the first such gap, but on Friday we're getting the band back together (including a boyfriend and girlfriend who will be exposed to the full oddness of the Averaigne Adventurers en masse).


So what's been happening since the last session? Well...

[The story so far]

Session 40 - in which there are trolls, a sad end, bandits, guile, guilt, vengeance, and promotion
The adventurers, including new recruit Gern, head after Lord Montfort to force him to explain his role in the lizardyness of his wife.

NOTE: in order to keep a complete record, but not put off posting these any longer, I'm just transcribing my DM notes. Short and sweet, but this was a monster session to round off our regular gaming. And it happened about a year ago (bad Mr Rab!), but we've the opportunity for a game on Friday so I'm getting things up to date again.

After a few months in which I've been using my desk for non-gaming creativity, I've has a burst of mojo. Geeking hasn't been abandoned in the interim, however, and my two sons and I are nearly half way through a 2-teams-each Bloodbowl league. 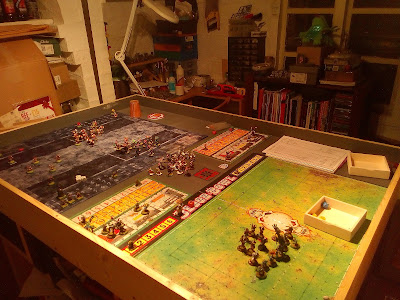 Fortunately I can fit two pitches side by side so the little Rablings can fluke their way to victory over me simultaneously... I am actually a little miffed that I've taught the older one to play skaven so effectively! 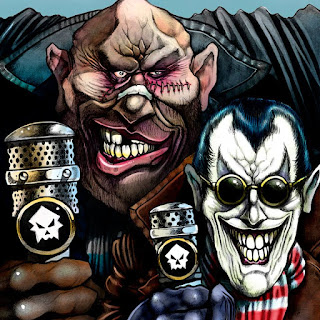 Good afternoon, sports fans, and welcome to round two of the inaugural RaBBL league!

Last week saw a fantastic double-header with the Vantius Villains from the Northern wastes beating the pre-season favourites Moloch's Malefactors 3-1, although taking a pummeling in doing so. Meanwhile, the chaotic Beastly Bonecrunchers edged to a 2-1 win over the World's Edge Wyverns orc team.

And now we get the winners of those two matches competing to take an early lead in the championship. The weather is beautiful, the crowd of 18,000 are ugly as sin, the two teams (and their coaches!) are slavering psychopaths... perfect!

He was sitting with his back to a great tree, as if he was resting. But Aragorn saw that he was pierced with many black-feathered arrows; his sword was still in his hand, but it was broken near the hilt; his horn cloven in two was at his side. Many Orcs lay slain, piled all about him and at his feet.


One of the arguments I regularly trot out to the incomparable Mrs Rab about why I'm painting "horrible, ugly monsters" is that without such horrible, ugly monsters, how are the heroes to prove themselves? Tolkien (of whom she is sensibly an admirer) understood this and so, while he further understood that the worst monsters could be apparently fair or only temporarily wicked (Boromir himself...), I picked half a dozen older Citadel orcs as the next victims of my brush, of whom the first three are now complete. 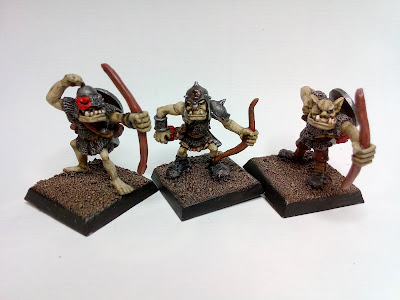 With a grunt of "It'll do!" I put down my brush and reached double figures of completed miniatures for 2018 and also completed the set of current characters (seven, plus a dog and a choice of two characters to replace the latest one Ed killed) for my currently-paused old-school D&D campaign, Averaigne.

The latest two figures are the (previously unknown to me) adventurer variant of Mimbrin from the Dwarf King's Court boxed set from 1982 - exactly the same figure but with a great big pack slung across his back - and a masked wizard that caused me much irritation to paint. Still, no regrets and no do-overs this year, so he'll have to face eldritch what-nots and delve into long forgotten dungeons just as he is! 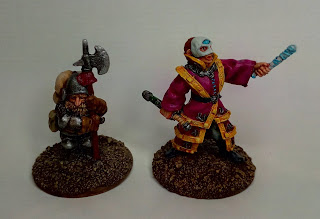 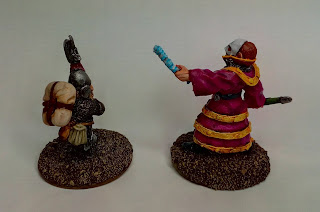 Assuming that "Mimbrin" will take on an NPC role, the photo below shows the party at full strength.